There aren’t many diaper bags that I like and if I do like them, they were to expensive. So I decided to DIY a cheaper bag. So I found a bag at Large.nl and also bought some buttons (Ssome Punk themed, Sons of Anarchy themed and Nightmare Before Christmas themed) and studs. I already had some safety pins and those square studs. The bag is called ‘Retro Shoulder Bag’ and I chose the one with the red border.

It was under 20 euros and it can fit a lot. So I took everthing that I wanted to use and layed them out on the bag. I took a photo of the design I wanted and started to add it onto the bag. And to make it a bit more of a bag for my son, I made his first letter with those square studs. 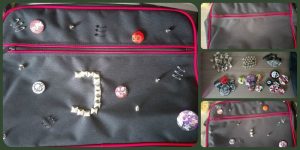